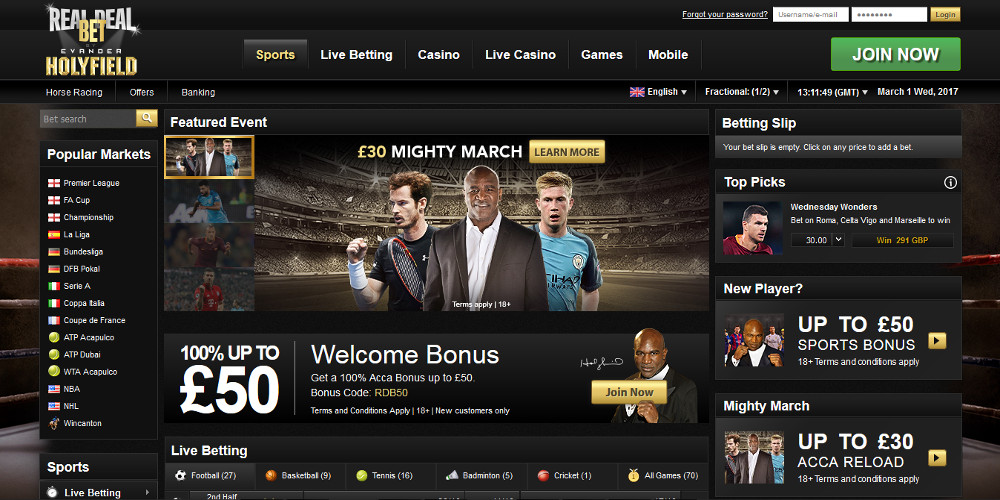 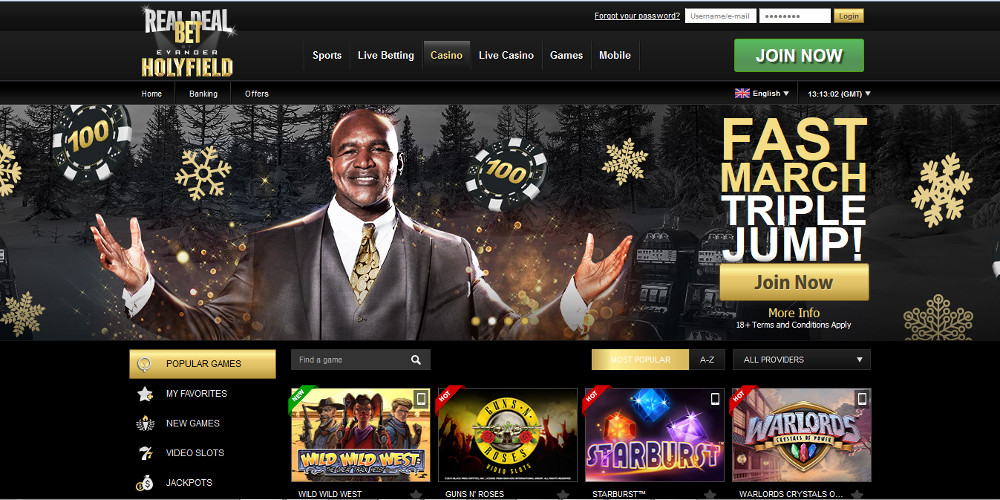 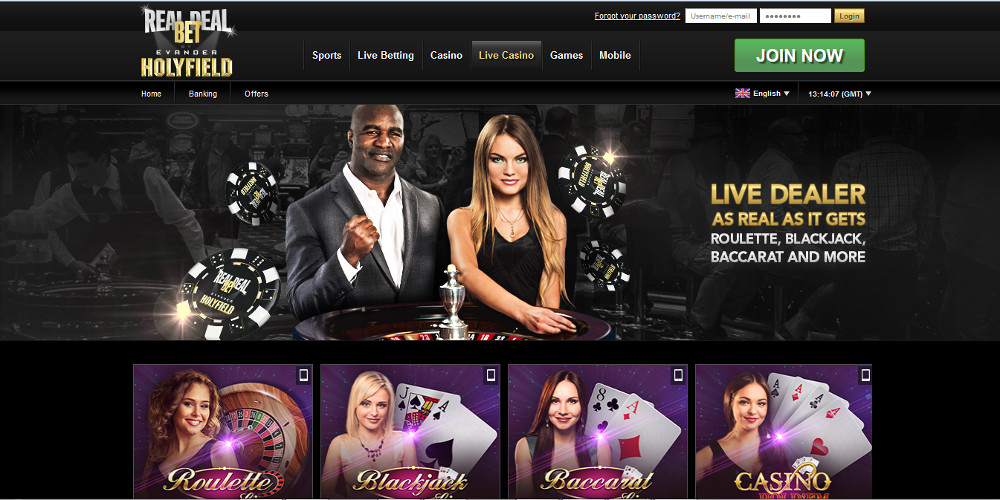 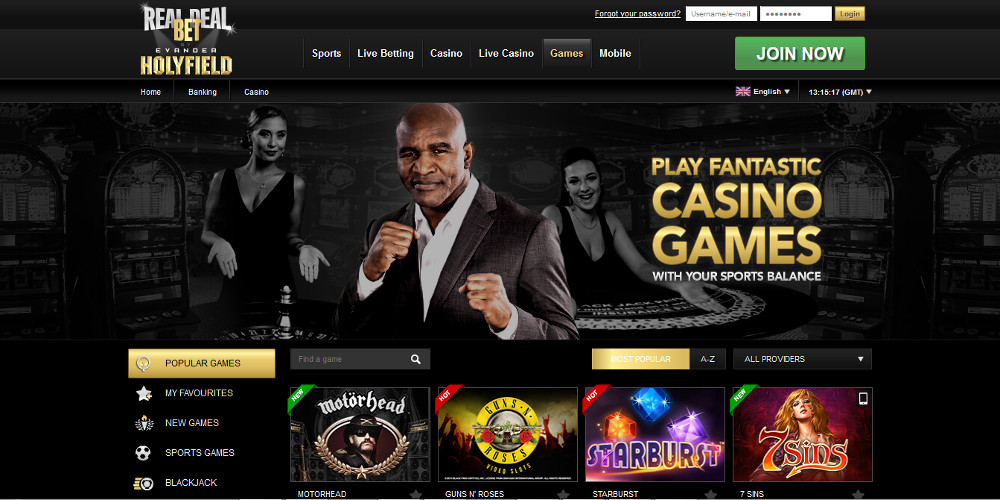 Recently we’ve looked at ways in which a new bookmaker can stand out from the crowd as they attempt to win some custom from the big boys. You can, of course, offer a great welcome bonus and you can make sure that you give plenty of choice when it comes to markets and some great value in terms of odds.

RealDealBet have looked to take care of those aspects but they have been ground breaking in letting a brand ambassador effectively take over their marketing.

RealDealBet are named after the ‘Real Deal’ himself – former world heavyweight boxing champion Evander Holyfield was nicknamed the Real Deal after unifying the classes and when you log on to the bookies’ home page, he is their main face.

So it’s his sportsbook but is that enough to convince you to sign up? What else do we learn from first impressions?
Well, the website has a nice, eye-catching design with great graphics at the centre of the page that stand out without dominating or obscuring the rest of the home page. You can easily find what you want, whether it’s current markets or promos and there isn’t too much information below the fold so you don’t have to scroll down too far to get to the end of it all.

One area that isn’t perhaps in its natural place is the customer support section but this is relatively prominent. Meanwhile, those of us who like things to be laid out in a logical order will be pleased to learn that the list of markets is mainly shown as an A – Z, with the exception of the most popular – football, horse racing etc which appear first.

Overall, it’s a good start that ticks most of the boxes.

RealDealBet were launched officially in 2015 and among the crop of new bookmakers this looks to be one of the best, if not the best, set of sporting markets around. It has everything from the regular options such as football and tennis through to some very obscure niches.

It’s one that seems to be expanding too but as of April 2016, this is the full list:-

As a progressive bookie, RealDealBet are taking the trend in eSports very seriously and they have a number of markets for this while politics and entertainment are also covered.

Expect them to start appearing on the odds comparison sites very soon but early checking shows them to be very competitive in all areas, particularly football.

RealDealBet are operated by Blue Star Planet Ltd and licensed in Malta and all of this information is easily found on their home page. Scroll to the very bottom and all of this is listed in full while a separate ‘About Us’ link carries some words from Holyfield as to why he is involved.

While it’s easy enough to find all this information lying around the internet, you need your bookie to be open and transparent and that’s exactly what you get.

While RealDealBet are obviously a little different from the clutch of new bookmakers currently on the web they will still require a strong opening offer in order to catch players’ attention. Currently, new account holders can get a welcome bonus, based on a 100% match of their opening deposit, up to a maximum of £25.00.

That’s competitive in the current market and while it’s not that exciting compared with other deals that are out there, this one is easy to follow and take advantage of. Better still, RealDealBet go on to offer a regular monthly reload which can earn up to £25.00 as a 50% match.

In the early days of any sportsbook, it’s typical for the operator to just quote a small welcome bonus. Customers come and take advantage of it before leaving their accounts dormant so it’s really encouraging to see RealDealBet rewarding loyalty.

While some players might like to see a wider range of payment options placed on offer, it’s a real coup for a new bookmaker to be able to provide Paypal as a funding method. This opens them up to a much better range of global custom and that’s a real plus point.

RealDealBet also offer Skrill, Neteller and EcoPay
along with all the traditional methods including Bank Transfer, together with all the major debit and credit cards.

Funding is fast and free and this is another sector where RealDealBet have impressed so early in their lifecycle.

If you’ve read this far then you’ll probably expect RealDealBet to have an active Social Media presence and you would be right. As of April 2016, their busy Twitter account had 426 follows and although that sounds modest, it is building.

It’s even better over at Facebook with nearly 2000 people liking their page and once again this is a busy account. If there was one small observation it would be to say that Twitter focuses a bit too much on what Evander thinks and perhaps there could be more general news updates mixed in.

Whether you like the Evander Holyfield link or not, there is lots to enjoy over at RealDealBet and they have made a really impressive start for a new bookie. A decent welcome bonus is backed up by a reload offer and the choice of markets can certainly compete with the big and established operators.

There are few, if any downsides although they don’t appear on the main Odds Comparison Sites as yet so you would have to check all the markets yourself. However, prices seem strong across the board.

Elsewhere, the website is easy to follow and laid out in a logical order while the funding options are also good. There’s lots of positives here and plenty of reasons why you should consider signing up.